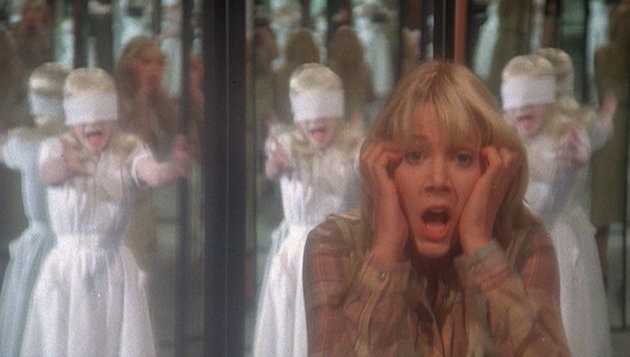 I’m going to have to sell our house and move. Not because the holidays left the carpets permanently covered in Christmas tree sap or because the HOA refuses to abolish it’s ridiculous “No Exotic Pets” rule. That would just be crazy.

It’s because our bathroom mirrors are haunted. By demons. I’m not talking about the metaphorical kind that distort the memories of balding middle-aged men, either. In fact, I don’t even know what “metaphorical” means. No, I’m talking about the kind that have been damned to spend eternity rapaciously dragging onlookers with them into Hell.

As everyone knows, the early 80s were the worst time in the history of the world to be a middle schooler: short-shorts were inexplicably gaining popularity in gym class, bullying was an acceptable and lucrative alternative for kids who were academically challenged and/or had a mustache, and everyone lived in fear knowing they could, at any moment, be eaten by a Demogorgon. It was just like Season 2 of Stranger Things, but with less likable characters. Then, to make things worse, Disney Studios came along and produced The Watcher in the Woods, a supernatural thriller that unleashed mirror demons into the life of anyone foolish enough to watch it alone at night on VHS.

Which, regrettably, I did.

If I could go back in time and undo one bad decision from that era, it would be to not wear parachute pants on my first day of 7th grade. But if I could undo two bad decisions, the second one would definitely be to not watch that film.

Unfortunately, time travel hasn’t been invented yet because our top scientists are all busy trying to reduce the number of global conflicts being caused by NFL referees. Although I applaud their efforts, it means I’ve had to survive the past three-and-a-half decades by vigilantly avoiding mirrors after dark, which is when demons are the most murderous.

This strategy was working fine until my bladder (now 47) decided it was too old to support my habit of sleeping through the night. That’s when I realized it’s impossible to travel between the edge of my bed and a flushable toilet without confronting at least one large mirror. So, I did what anyone in this situation would do: I picked up the phone and dialed our realtor.

My wife, who is often skeptical of great ideas, insisted I hang up immediately. She said there’s no way we’re selling our house, especially at two o’clock in the morning, and I should instead turn on the lights and go use the bathroom like a sane person. I then told her that turning on the lights only makes them furious and she wanted to know who I was even talking about and I said mirror demons and she acted all surprised which made me think this was perhaps the first time I’d mentioned them to her in our 26 years of marriage.

So, I told her all about my short-shorts and Walt Disney and the NFL’s incomprehensible catch rules and my averseness to dying in a fiery abyss. In response, she told me I just needed to stop drinking so much water before bedtime.

As an alternative, I suggested we remove all our household mirrors. I said she could use the reflections from our stainless-steel appliances to get ready in the mornings then simply make micro adjustments to her appearance throughout the day based on the judgmental looks from her friends. Then she demonstrated a look of disapproval and I was like, yes, that’s perfect, and before I could stop myself added that people our age shouldn’t even be using mirrors because they only emphasize all the saggy parts. Then she said nothing, which was WAY more scary than mirror demons, so I immediately agreed to try her plan first.

I’ll see you in Hell, Walt.